“Stay-at-home orders are now in place in South Australia, Victoria and parts of New South Wales,” the BBC reports. New lockdowns, in fact, impact 13 million Australians or roughly half the nation’s population. 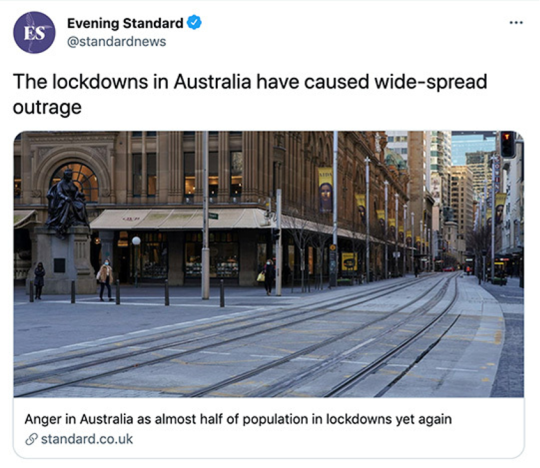 “Many people have expressed frustration at being back in highly policed lockdowns 18 months into the pandemic,” the BBC says.

Adding to Australians’ frustration is Prime Minister Scott Morrison’s anemic Covid-19 response -- just 14% of the population have been vaccinated.

How about the U.S. response to the Delta variant? Do you think the ship has sailed on quarantines, travel restrictions and business shutdowns? Or do you think the Biden administration will give ‘em a go?

Thanks for the feedback!

Our tech-and-biotech expert Ray Blanco reports: “Scientists from both the CDC and the WHO have come out and said it’s still too early to tell if boosters will be needed.”

Nevertheless: “CEOs of both Pfizer and Moderna have come forward with how long they believe the COVID-19 shots will last, stating that Americans could need a booster for lasting immunity as early as September.”

Here’s the rub: “Reuse of existing vaccines… might be problematic to add a third dose of Moderna or Pfizer’s mRNA vaccines to the mix,” says Ray.

According to the CDC’s Deputy Director Jay Butler, mRNA vaccines carry higher risk of serious side effects after the second dose. And a third dose could mean even more adverse reactions.

“That helps make the case that if we are going to do a third ‘booster’ dose to deal with the newer Delta variant, we’d be better off using a vaccine based on a different modality,” Ray says.

“That opens up possibilities for other vaccine-makers to squeeze their way into this market.”

In fact, Ray’s tracking one such company, and in addition to its booster potential, “this company’s shot is cheap to produce and easy to store and transport. The vaccine could earn the company billions.”

Enjoy the weekend… We’ll be back Monday.