The following tweet is about as good a summary of whats been happening in the world of finance since the SHTF Friday. 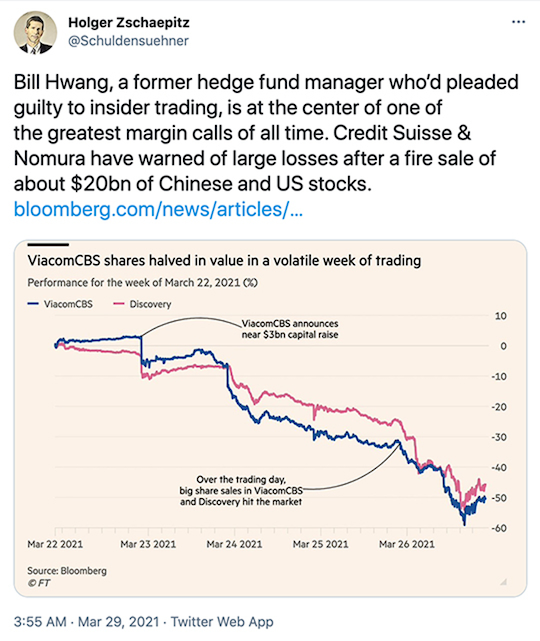 For some context, Bill Hwang of Tiger Asia Management pled guilty in 2012 -- on behalf of his employer -- to wire fraud charges after the SEC found Tiger Asia traded on material nonpublic information, reaping $16 million of illicit profits in 2008 and 2009, Bloomberg notes.

So, Tiger Asia paid a $44 million fine and was effectively out of business. But not really

One year after the insider-trading scandal, in 2013, Hwang essentially converted Tiger Asia into a supposed family office to manage Hwangs private wealth.

And setting up as a family office was a stroke of evil genius too, exempting Archegos from SEC-filing requirements. Apparently, opacity was the name of the game at Archegos even though the family office had grown bigger than some hedge funds.

Archegos Capital Management, appears to be massive, not just in size and scope, but also in risk appetite, Forbes reports.

According to Boomberg: Traders familiar with his orders describe Hwang running a long-short strategy with exceptionally large leverage, meaning that for every dollar of his own, hed pile on several times as much in borrowed money. (emphasis ours)

Which brings us to last week when some of Archegos biggest holdings -- including several Chinese tech stocks and U.S. media stocks ViacomCBS and Discovery -- sold off big-time.

Heres why: Hwangs Archegos Capital Management was forced by its lenders to dump more than $20 billion of stocks on Friday in a series of market-roiling trades so large and hurried that investors described them as unprecedented, Bloomberg says. This morning, that figure is thought to be more in line with $30 billion

And Archegos lenders were caught with their pants down: Banks across the globe, including Morgan Stanley, Credit Suisse, Nomura, UBS and Goldman Sachs -- its quite a roll call.

Forbes concludes: The potential questions arising from the Archegos firesale are important: Did Wall Streets big brokerage houses do any real risk management prior to the implosion?

Or. Did the fat fees from complex swap trades and yield-generating lending arrangements drown out any concerns from compliance officers and risk managers?

We all know the answer

Which sector is going to outshine the rest in 2021? Ray Blanco asks. I believe one of the best bets is a sector that had a stellar 2020.