How to Fight Market Volatility

Your letters from a wild week of market volatility:

Opportunity knocks. I was able to enter well under some previous Buy Up To levels.

I think its worth pointing out that inflation does not mean price increases. It precedes them, but the words are not interchangeable.

Well put, and we apologize for how we phrased that on Wednesday.

I moved more money in after Monday. I bought the dip.

I tightened all my stops several months ago. Lots of blue chip companies continue to rise and pay great dividends.

A great line. Thanks for sending that one.

I have been trading since the early 1980s. In the summer of 1987 I was making so much money, for no reason, I sold every stock I owned and was on vacation in Washington D.C. on the Monday the market went down 23%.

Timings everything. Well done. If that story were mine, Id certainly still be getting mileage out of it at cocktail parties all these years later.

Finally, a letter we think might be a plant, or a ruse of some sort:

Im not panicking at all. I would be if I were alone in this but, you guys at Agora are so smart, so experienced, if you say be calm, stay strong I will and I have.

In all seriousness, Ray Blanco, Greg Guenthner, Jonas Elmerraji, Mike Burnick, and Rich Jacobs are a great team of editors and analysts.

All praise goes to them. Theyve been around and know how to navigate all the market types.

Never Underestimate the Power of an Earnings Report

A slew of big names reported earnings this week.

The savvy saw a short respite from the weeks volatility as select shares raced higher on positive earnings news.

Looking at individual stocks, we can see exactly how an earnings report can be a massive needle mover.

And in times of market chop like were seeing now, they can really save your trading day.

Take Twitter (NYSE: TWTR) for example. Shares jumped more than 12% Thursday rising from Wednesdays close of $26.92 to $30.18 on Thursday.

For the first time ever, TWTR reported a net profit, as reported by CNBC.

In a Bloomberg report, Dan Ives of GBH Insights notes:

Twitter is finally heading in the right direction after years of a one step forward two steps back strategy.

Check out the two day chart. See that spike? Thats the power of good earnings. 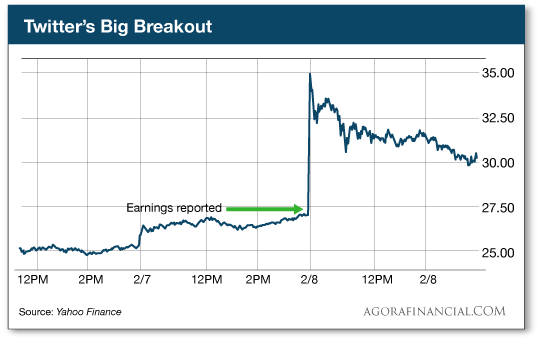 If you know where to look, theres money to be made in the market even on a down day.

However, a poor report can send shares tanking. In a hurry.

Look at Tesla (NYSE: TSLA). TSLAs earnings could be called a mixed bag, at best.

And the company is flat in terms of projected car production. Speaking on the earnings call Tesla CEO Elon Musk noted:

I'm hopeful that people think that if we can send a Roadster to the asteroid belt, we could probably solve Model 3 production, as reported by Investors Business Daily.

Oh, knock if off. You put a car in space. Congrats on that. Now as to the markets response:

The two-day chart tells all. 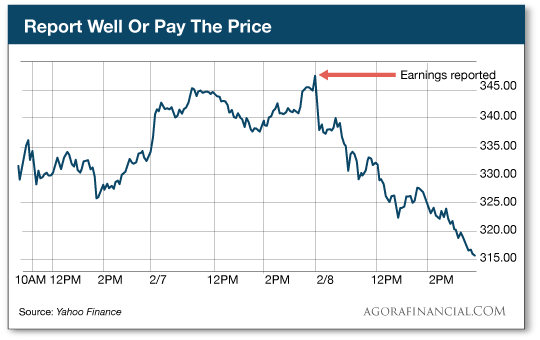 2018 may be the year Musk realizes charisma and big dreams only go so far. Until he puts a car on Mars, this is all just conversation.

To sum up, yes, theres uncertainty in the markets right now.

How long will this bout of volatility last?

Time will tell, but while we ride out this seesaw action, keep your eye on classic drivers of stocks like earnings.

Now, turning to the markets this morning...

Bitcoin, according to CoinDesk, goes for $8,226 this morning.

Well talk again on Monday. Have a great weekend.

Read This Before You Book A Hotel

Today's Rundown looks at travel booking site Expedia and the rough road the company's stock has been on lately. The stock fell hard on poor fourth quarter earnings last week. Today we assess the damage. Then we check in on the markets.