Friday, we discussed plant focused cannabis companies, and Rays belief that to thrive, companies must deliver a high-quality, consistent product.

A comment Ray made to your editor and Jonas Elmerraji at dinner Thursday evening sticks with us four days later.

To wit, Ray couldnt stop talking about his meeting with executives from a Vancouver, B.C., Canada-based cannabis company.

This company has well-respected ex-biotech executives advising them. They have a science first approach. Canadas so far ahead of American cannabis already, this company could become the next Aurora or Canopy Growth.

Both those names, as you know, shot up this year. Rays newest target could do the same. More soon as his research develops

Pressing Ray for a takeaway before we parted at The Mirage Friday, Ray paused.

This isnt what if anymore. Cannabis is a tremendous benefit here in Nevada. In California next year too. It could also transform Canadas economy, he said. This is happening.

On the pick-and-shovels front, we can confirm Scotts Miracle-Gro (NYSE: SMG) is a good bet. We saw evidence of SMG products used in the cultivation of cannabis. 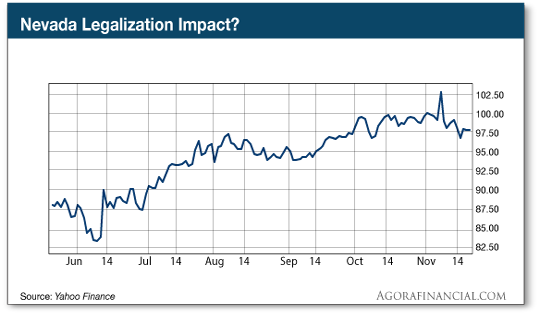 Were not suggesting legal cannabis in Nevada means a directly correlated boost for SMG.

But its certainly possible and a play worth watching.

Turning to the markets this morning

Jonas Elmerraji at dinner Thursday evening, after all the cannabis talk:

Amazon can never compete with the brick and mortar footprint Wal-Mart has. Wal-Mart becoming more nimble in e-commerce is a sure sign Amazon has real competition ahead. Would I be worried if I was Amazon? No. But Id be paying attention like never before. 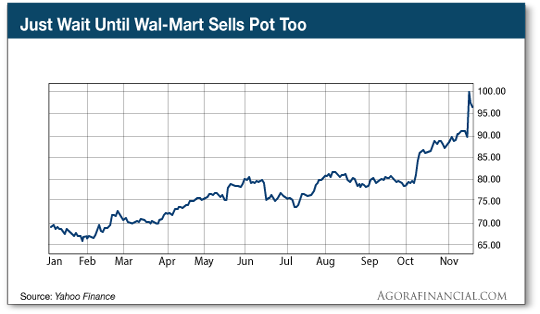 Written off as down-market and doomed, Wal-Marts ready for war.

Talk with you again Wednesday.

Todays Rundown examines the recent acquisition of Buffalo Wild Wings by Arbys parent company, Roark Capital Group. Despite a recent spike in share price, this is why you cant believe the hype behind every M&A deal. Then, we take a look at the markets this morning.